WE HAVE MANY THINGS TO CELEBRATE

On 1st February passed 40 years since the founding of the SIM company by Ignacy Marek Szczypek. To celebrate such an important anniversary, jubilee party was organized with the participation of owners, employees and invited guests. The ceremony took place at Stary Maneż – a popular Gdańsk cultural center famous for arranging concerts, theatrical performances and exhibitions.

An important element of the ceremony was the speech by the head of the company, in which appeared references to the beginnings and significant stages in history of firm. After the harangue of the most important person, without whom there would be no SIM, came the time for thanks and congratulations from representatives of employees and invited guests.

At the entrance everyone was greeted with an aperitif. During the whole evening guests could count on a tasty treat – at first served by waiters to the tables and later in a form of a buffet with hot and cold dishes. One of the culinary attractions of the banquet was roasted wild boar served with cabbage and potatoes. This delicious surprise rode into the hall accompanied by music and light. The highlight of the program was a cake for 360 people decorated with logo of SIM. It is a tradition that the first piece was cut by the owners of the company – Lidia and Ignacy Szczypek.

During the jubilee event guests could hear musical hits performed by the Tricity vocalist – Maciej Miecznikowski. Famous Polish artist, together with the band, appeared on the stage several times and not only as a singer. He also helped to run a knowledge quiz about SIM. Every participant got a valuable prize.

Although only three persons could take part in the competition, the rest of the guests were supporting them by prompting and shouting the correct answers. Everyone has many laughters. Especially that in six categories there were questions not only about the date of establishment of SIM and the first headquarters of the company, information about products and customers, but also the curiosities associated with the head of the firm and his family. Now all among others knows, what is Mr Szczypek’s favorite drink, what kind of animals live in his home and what enterprise is our largest recipient and what is the furthest away country from Poland to which we send products.

Of course, there is no good party without dancing. DJ Tomasin took care of fun until late at night. That evening everyone was in a good mood, which can be seen in the pictures and the movie below.

Let’s celebrate the jubilee together one more time! 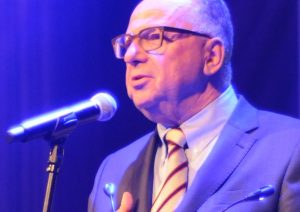 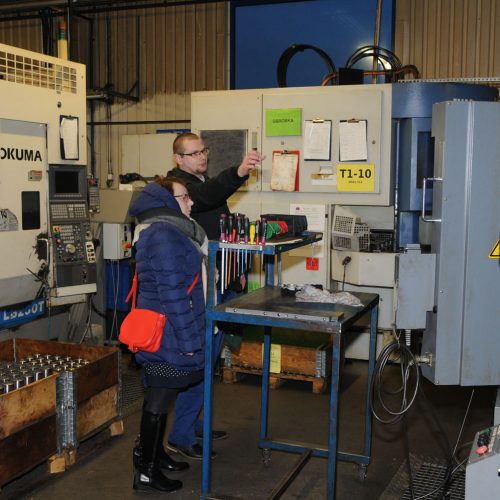 The open hours at the headquarters of the SIM at Rewerenda 7 were the first point of the jubilee celebrations. The employees showed the company to their families, friends and first of all to our clients and recipients. 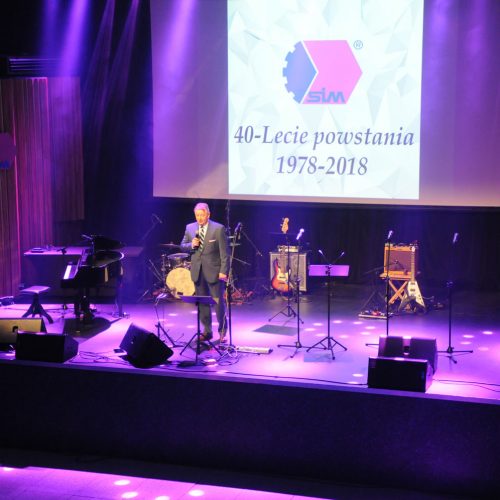 Around 6 p.m. vice-president Grzegorz Jóźwiakowski welcomed everyone at Stary Maneż. In a few words he thanked for coming and wished all a good evening. 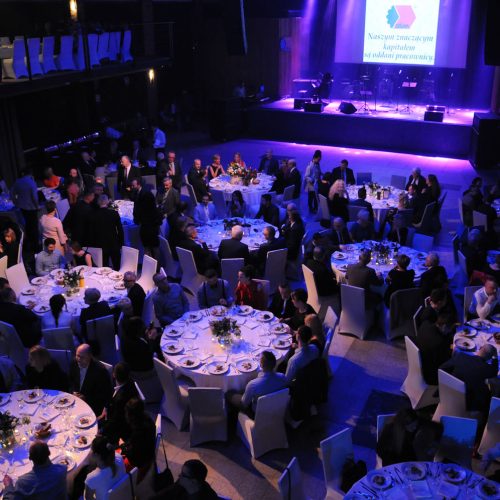 Everyone had a good mood. The guests were pleasantly surprised and you could hear a lot of positive opinions about the jubilee party. They felt it was very solemn, cheerful and tasty. 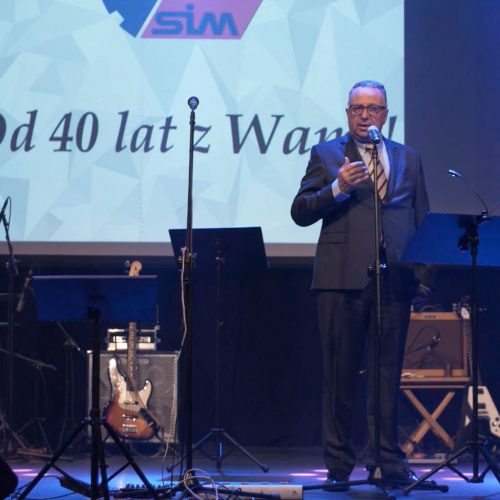 The most memorable moment of the evening was the speech by the founder of the company – Mr Ignacy Szczypek. The history of SIM presented by him concisely and in an attractive way only confirmed the listeners in the belief that the “American dream” can be fulfilled even in Poland. A storm of applause coming from the hall reflected respect for the achievements of the last 40 years. 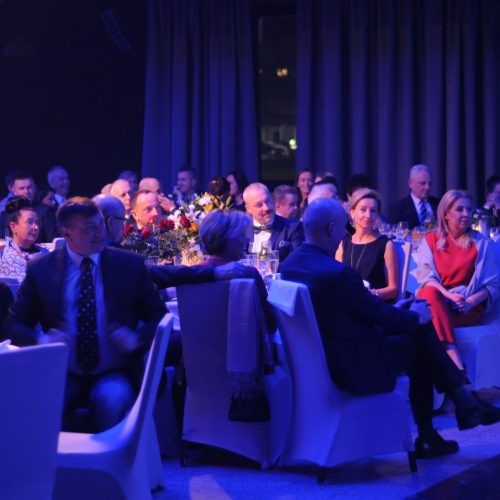 During Mr Szczypek`s appearance on stage family members and the oldest employees nodded understandingly, the others listened with interest. 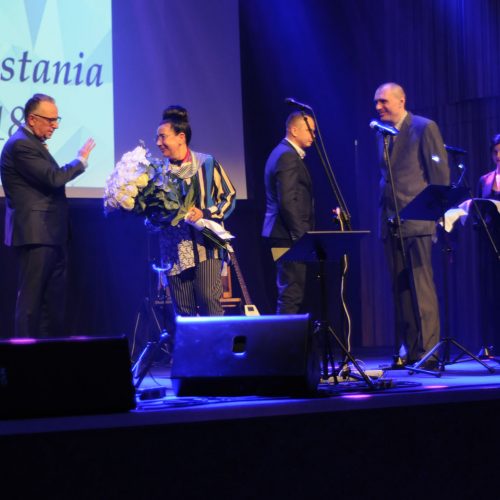 Crew representatives congratulated Mr and Mrs Szczypek. After that, they handed gifts – the head of the company received golden cufflinks with the logo of SIM and Mrs Lidia got 40 white roses. 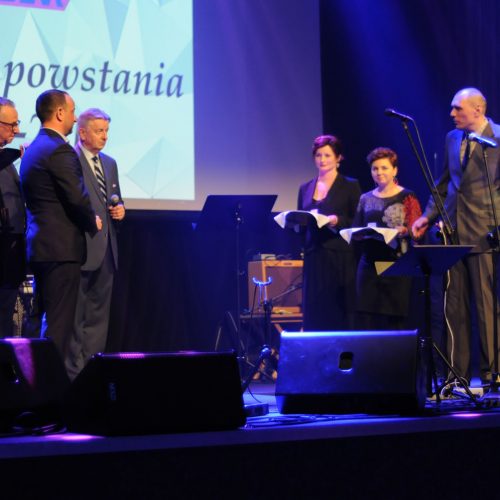 Congratulations and wishes for further success were also received by the board members in the persons of the president Andrzej Szczypek and vice-president Grzegorz Jóźwiakowski. They were both honored with silver cufflinks with the logo of company. 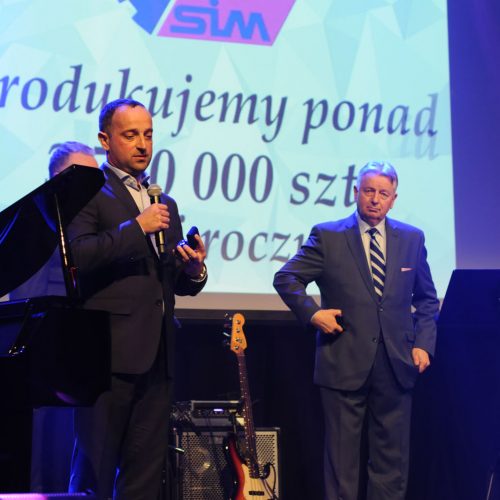 The key role of the employees in building the company`s success was emphasized during the emotional thanks speech by the firm president Andrzej Szczypek. 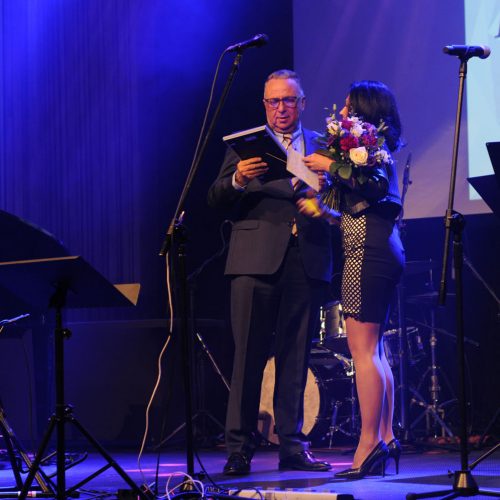 Representatives of the clients, suppliers and companies supporting SIM also took the chance to congratulate. 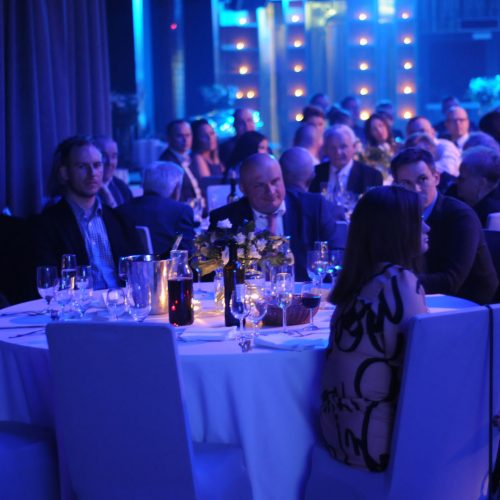 Delegates of our foreign and domestic clients were with us. 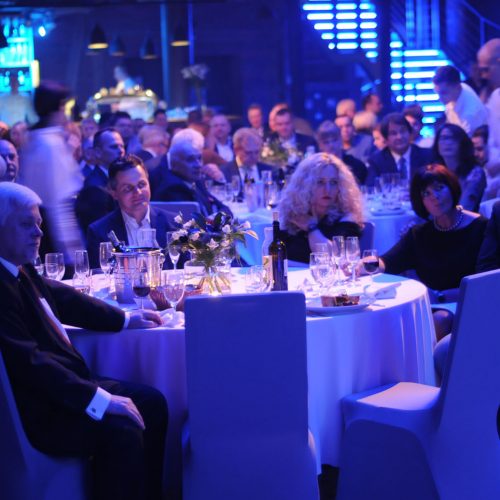 Among the guests there were also people representing banks, leasing companies and our suppliers. 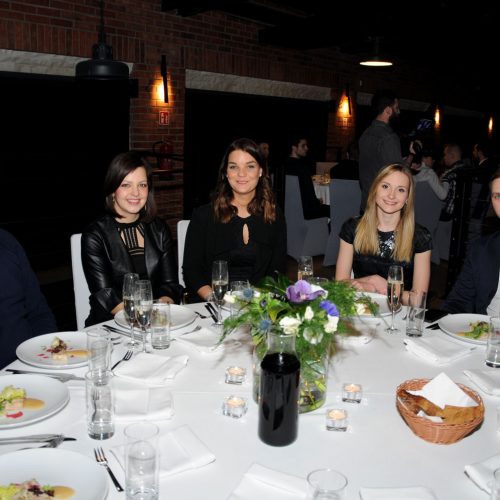 Our employees were important guests of the jubilee. 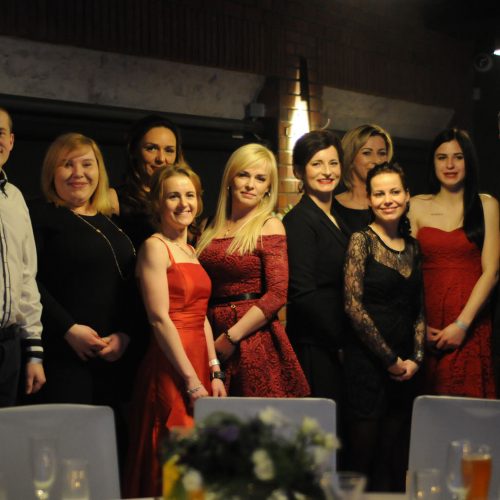 Without work uniforms, many employees were hard to recognize. We have to admit that in such an elegant version they would shine on every red carpet. No wonder everyone eagerly posed for commemorative photos. 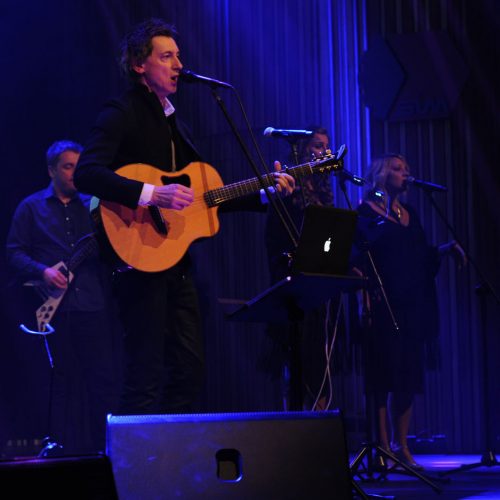 The musical star of the evening was a graduate of the Academy of Music in Gdańsk, vocalist, songwriter and actor, a man from the Tri-City – Maciej Miecznikowski. 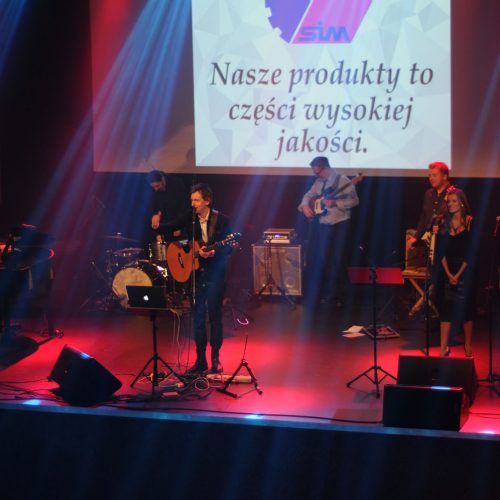 Together with the band Miecznikowski performed many well-known Polish and foreign music hits. 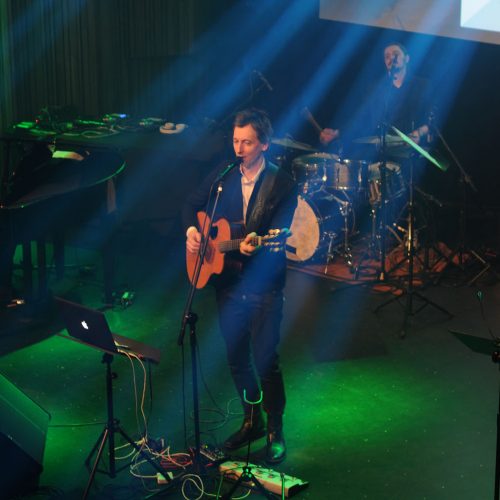 During the performance the vocalist encouraged everyone to dance and have fun. 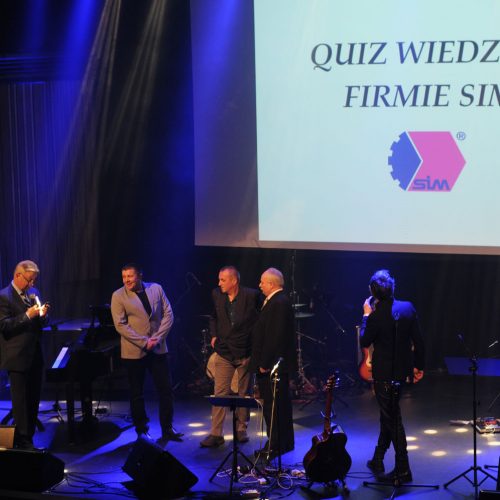 One of the attractions of the evening was a knowledge quiz about the SIM company. Although only three members of the employees took part in it, everyone else was trying to help them, by shouting right answers. 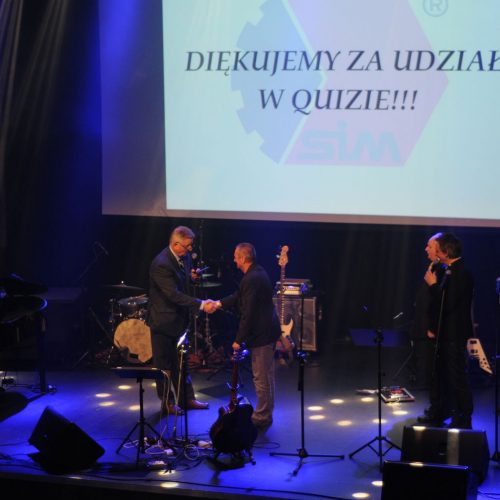 After six rounds of the quiz, the winner was selected without a doubt. However, to decide who took the second and third place, we needed a play-off. At the end all the participants were awarded with attractive prizes. 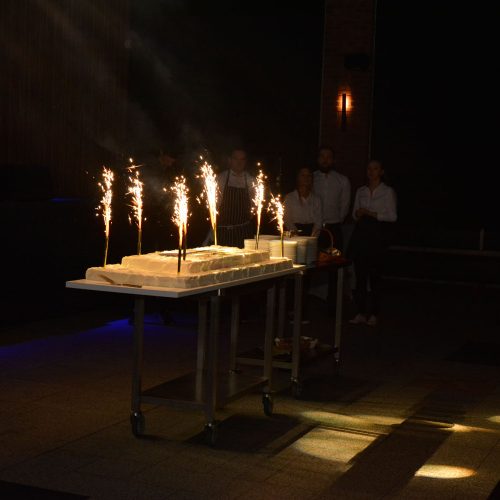 Another attraction of the evening was a festive jubilee cake, which entered the hall with the accompaniment of fanfares and light illuminations. 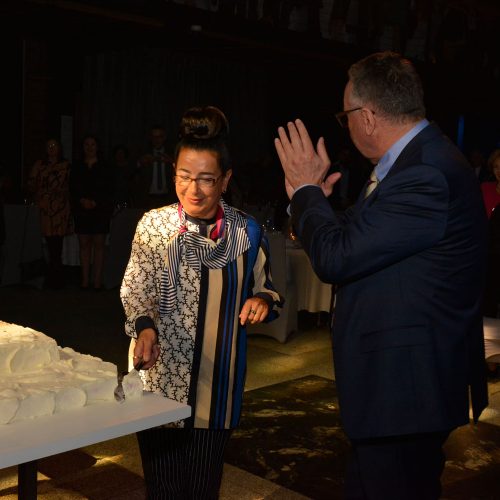 Traditionally the first piece of cake was cut by Mrs Lidia Szczypek. 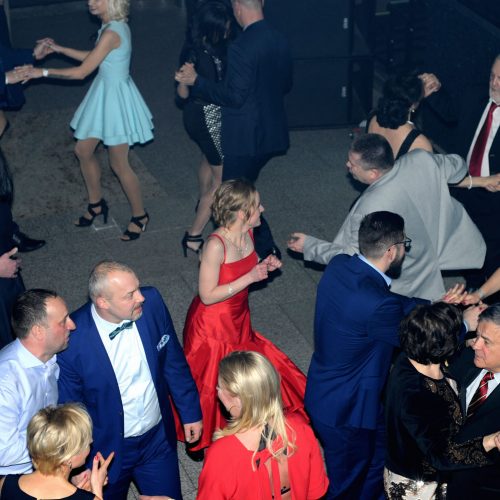 After few hours DJ Tomasin took Maciej Miecznikowski`s place and invite everyone to the dance floor. 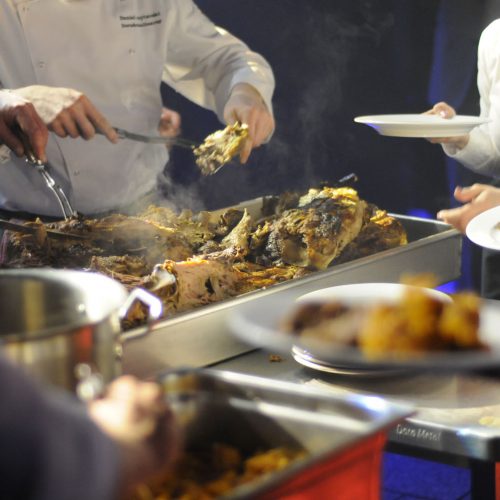 The last of the attractions was a roasted boar. At the time of serving this dish DJ presented Mr Szczypek`s favourite songs. 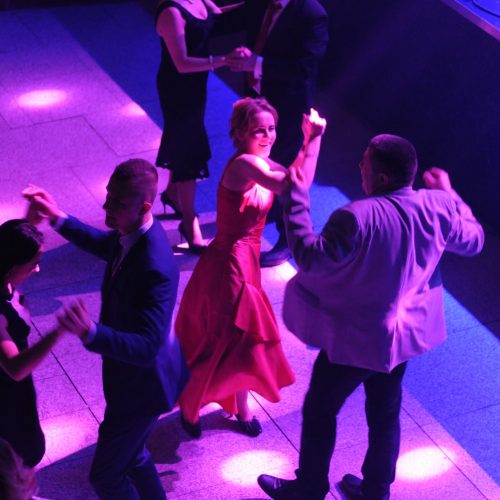 The party lasted until late at night. 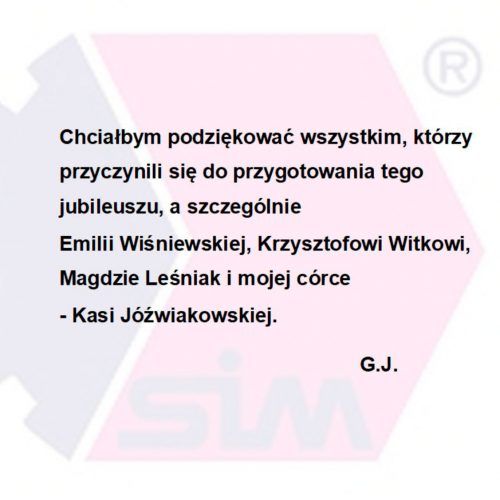